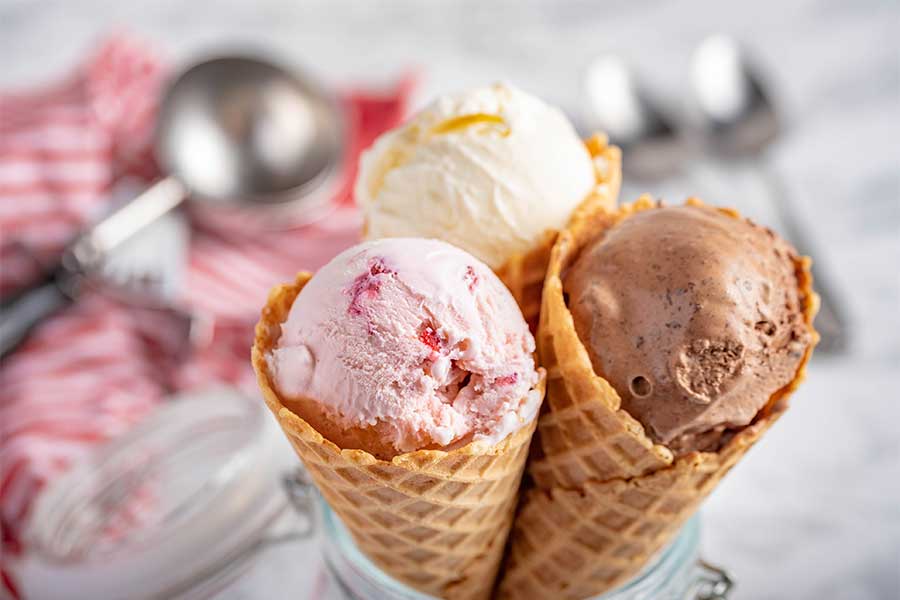 Summer, where I’m from, is a wonderful thing. When the weather warms up, people head outdoors. Days are long and hot—perfect conditions for canoeing, biking, and having picnics by the lake. Best of all, a sweaty brow is a great excuse to gather your friends and go out for a drippy cone of ice cream.

It’s cold. It’s sweet. It’s creamy. And that burst of fruit-filled, nutty, or chocolate-chunky flavor can be incredibly refreshing when the steamy heat of midday starts to weigh you down. As far as I’m concerned, ice cream is summer’s most delightful treat.

Not all ice cream, however, is perfect ice cream. Texture matters as much as flavor. Nothing’s worse than an icy scoop, or one that tastes grainy, syrupy, or artificial.

So, what’s the secret to decadent ice cream that tastes like a dream and feels like a silky cloud melting in your mouth? High-quality ingredients, for one, are essential, plus fine-tuned techniques that combine ingredients in just the right proportions with a perfect amount of air whipped in.

“There’s a lot of science behind it,” says David Smith. He’s a food scientist at the University of Minnesota, Twin Cities.

For ice-cream manufacturers, the science of ice cream matters a lot. According to the International Ice Cream Association, people in the United States spend more than $20 billion on cold, creamy treats each year. The U.S. Department of Agriculture says that, in 2004, each person ate an average of about 21.5 quarts of ice cream.

To satisfy the population’s unceasing demand for the sweet stuff, companies are constantly on the lookout for ways to make better-tasting ice cream that lasts longer, costs less, and is more nutritious than current varieties.

The highest quality ice creams have the fewest ingredients. From vanilla extract to fresh strawberries, each component is topnotch.

The best ice cream varieties also tend to have the least air in them, which makes them denser. A cheap brand may be half air, Smith says. Gourmet brands are more like 15 to 20 percent air. In other words, the better the ice cream, the more of it you actually get in each bite.

“Pick up a half gallon of economy brand and a quart of super-premium,” Smith says. Even though the half-gallon is much bigger when it comes to volume, there’s not much difference in the amount of the frozen stuff that you get.

Air is pumped into ice cream near the end of the manufacturing process, after the basic ingredients have been mixed together and cooled down, but before fillings, chunks, and other flavorings go in.

As the concoction freezes in a huge container, large blades spin the creamy goo around and scrape ice crystals off the sides of the container. For high-end brands with lots of butterfat, the process is enough to prevent iciness. Some companies churn their ice cream slowly and for a long time. This process helps fat globules stick together and produces a creamy, somewhat greasy texture.

Economy brands that skimp on richness and are churned more quickly, however, have to add extra ingredients. Emulsifiers, for example, keep fat suspended throughout the final product. And stabilizers control the growth of ice crystals.

Some companies don’t use stabilizers. Left in the freezer for too long, a carton of this sort of ice cream ends up with an icy beard on top. Ice cream that melts and refreezes often has the same problem.

Yummy and healthy
In the battle against ice crystals, one recent avenue of research has focused on molecules called antifreeze proteins. Found in certain types of fish and plants that live in extremely cold environments, these proteins prevent ice crystals from forming, which keeps the organisms from freezing to death. Perhaps they could do the same for ice cream. The technique isn’t yet practical, however.

In the meantime, many companies are trying hard to make ice cream that is both yummy and healthy. In its traditional form, ice cream is loaded with calories and fat. It’s the fat that carries the flavor and produces the smooth texture. “You’ve got to have fat,” Smith says.

All that fat, however, is a problem when it comes to obesity, diabetes, heart disease, and other weight-related illnesses. So far, no one has managed to create a low-fat version of ice cream that tastes as good as the real thing. That’s because normal ice cream is about 60 to 62 percent water and 10 to 20 percent butterfat, Smith says. (Ten percent is the minimum amount of butterfat a product must contain to qualify as true ice cream.)

Once you start taking out fats, water content can shoot up to 70 to 78 percent, Smith says. The more water a frozen dessert contains, the quicker it turns to ice and slush, and the less flavor it has.

While it’s not a good idea to have sundaes and milkshakes with every meal, a cool cone may be one of the most enjoyable parts of summer, and it’s not necessary to give up the habit altogether. When you do indulge, just make sure to savor every bite. Appreciating it fully might make the experience even more special.

“Ice cream is unique because you don’t get it every day,” Smith says. “You eat it on special occasions or when you go to the park. It’s usually a happy time.”

See you at the parlor!