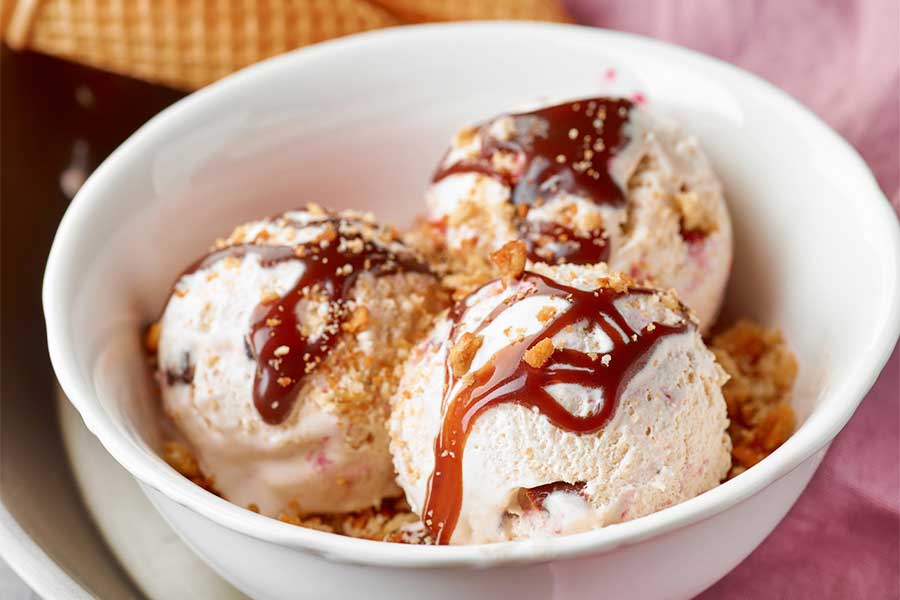 Americans eat more ice cream than anyone else in the world-about 35 pints per person per year. From classic vanilla to green tea to salted caramel, the flavors are endless. But flavor isn’t this frozen dessert’s only attraction. Texture provides most of the sensual appeal of ice cream, and it’s maddeningly ephemeral: firm on the spoon yet creamy in the mouth as it melts. Understanding how to achieve this delicious juxtaposition is the key to making high-quality ice cream at home.

How is ice cream made?
To transform cream (and milk) into ice cream, you add sugar, flavorings, and sometimes egg yolk and then chill, churn, and freeze the mixture. All of this happens in three distinct steps.

Mixing First, milk, cream, and sugar are heated until the sugar dissolves. The mixture is cooled, and then flavorings are added. For a richer-tasting custard-based ice cream, also known as French-style, the hot cream-sugar mixture is whisked into egg yolks and then returned to the heat to thicken the egg proteins and kill any bacteria.

Freezing Next, the liquid ice cream goes into an ice cream machine. In the machine’s churn (a container with chilled walls and a mixing paddle), the mixture is stirred as it freezes until it’s as thick as softly whipped cream.

During churning, air is incorporated, which increases the overall volume of the ice cream. The inflated volume is called overrun. Some commercial budget ice creams have overrun as high as 100 percent, meaning they are half air, melt quickly, and store poorly. Premium ice creams and gelati typically have less than 25 percent overrun, which is why a pint of premium ice cream can weigh as much as a quart of budget ice cream (and taste a lot better, too).

Hardening It’s difficult to fully freeze ice cream while churning because the mixture has to remain soft enough for the paddle to keep moving. At this consistency, about a third of the water in the mixture is still not frozen, and the ice cream is not yet firm enough to scoop or stand up on an ice cream cone. The semifrozen ice cream still needs to be packed into containers and frozen until firm (about 10°F). This step, called hardening, is best done in a freezer set at 0°F or lower.

What gives ice cream its creamy texture?
Ice cream’s creaminess depends on the size of the ice crystals that form during freezing-the smaller the crystals, the creamier the texture. Rapid chilling and constant churning encourage the water in the ice cream mixture to form lots of minuscule “seed” crystals; this process is known as propagation. Ice cream containing lots of tiny ice crystals feels smoother and creamier than ice cream that is equally thick but with fewer, larger crystals. Constant churning helps keep the crystals moving as they chill, so they have less time to attach to one another and form clusters that would interrupt a creamy mouth-feel.

Ice cream manufacturers often rely on added ingredients to keep their products creamy. Many add emulsifiers (such as lecithin), milk powders, gums, and other stabilizers that bond with free water in the mixture, making water less available for crystallization. Stabilizers are usually plant-based ingredients like guar gum and locust bean gum (derived from tree seeds), carrageenan (from seaweed), and pectin (from fruit). Among other things, stabilizers help prevent moisture from migrating out of the ice cream during storage, slow the growth of ice crystals, and make the ice crystals less detectable in the mouth. Simply put, stabilizers help keep commercial ice cream creamy-tasting under variable temperature conditions.

If you’re making ice cream at home, there are a few things you can do to encourage a creamy texture without stabilizers. First, make sure your ice cream mixture is cold before adding it to the ice cream machine. If your machine has a freezing insert, give it ample time to become frozen solid. If you’re using an old-fashioned ice cream churn with a sealed ice cream canister set into a bucket of ice and salt, chill the canister before adding the cold ice cream mixture, and be sure to use small ice cubes (they’ll transfer temperature faster than large cubes) mixed thoroughly with coarse salt. It also helps to work in a cool, air-conditioned room rather than outside in the hot sun. Finally, to promote quick and thorough hardening, set your freezer to its coldest setting and pack the ice cream mixture into several small containers rather than one large one.

What makes creamy ice cream turn grainy?
When ice cream melts and refreezes (for example, when the container is left out on the counter, then returned to the freezer), its smaller ice crystals melt and then refreeze into larger ice crystals, which increases the overall crystal size in the mix. Evaporation can also cause large ice crystals to form. For instance, in a half-eaten container of ice cream, moisture can evaporate from the ice cream in the freezer and recrystallize on the inside of the container, where the ice crystals grow larger and larger. This is another reason why it’s helpful to store ice cream in small containers with little to no headspace. Furthermore, when serving, small containers allow you to take out only the amount of ice cream you need at the moment and let that amount soften gradually at room temperature until scoopable. Never microwave your ice cream to soften it for scooping; when put back in the freezer, it’s likely to develop a grainy texture.

What is brain freeze?
Brain freeze, or ice cream headache, is the sensation of pain caused by rapid temperature changes in your mouth. When you take a big bite of cold ice cream, blood vessels in the roof of your mouth constrict to reduce blood flow and heat loss. After you swallow, the blood vessels quickly rewarm and dilate, increasing the blood flow and stimulating nearby pain receptors. Your brain then sends out pain signals along your trigeminal nerve, the largest cranial nerve, and you experience pain behind your eyes and across your forehead, your jaw, and the back of your head. To prevent this, just slow down. Savor ice cream slowly in small bites. Or, if you’ve already pressed a big, cold bite against the roof of your mouth and then swallowed it, drink something cool to slow down the rapid rewarming of your blood vessels.