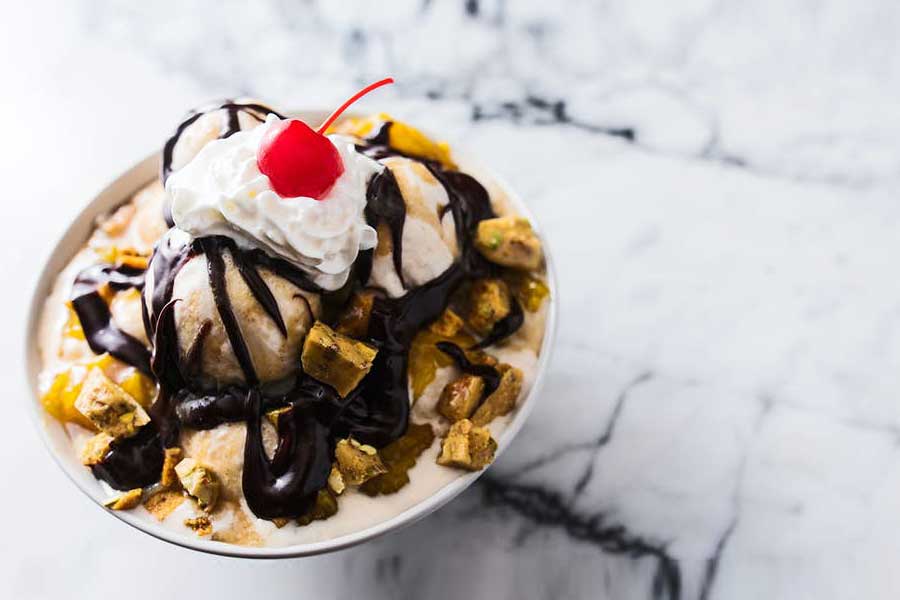 In what was probably one of the least controversial presidential proclamations ever made, former U.S. president Ronald Reagan declared July 15 to be National Ice Cream Day and July to be National Ice Cream Month back in 1984. “I call upon the people of the United States to observe these events with appropriate ceremonies and activities,” he wrote.

With an ever-growing array of ice cream options and innovations, observing those events only gets easier year after year. According to the International Dairy Foods Association, the average American eats more than 10 kg of ice cream every year. In 2017, U.S. dairies produced nearly 5.2 billion L of the sweet treat. Whether you choose to measure it in weight or volume—that’s a lot of ice cream.

Although the general formula for ice cream has stayed relatively constant, food scientists are continually tinkering with its components to achieve creamier textures, prolong shelf life, and delay melting.

Not only does fat bestow ice cream with that creamy, smooth texture, but it also teams up with proteins, emulsifiers, and air bubbles to create a three-dimensional structure that prevents the ice cream from rapidly collapsing when it melts, says H. Douglas Goff, an ice cream expert and food scientist at the University of Guelph.

Milk proteins interact with fat globules to help suspend and disperse them in the ice cream, forming a stable emulsion. Additional emulsifiers—for example, mono- or diglycerides—destabilize the fats so they partially coalesce, creating a branching network of fat globule clusters that surround and support air bubbles throughout the ice cream. The air bubbles are whipped in during the early stages of freezing, creating a foam that ultimately makes up 20 to 50% of the final product by volume.

The whipping also serves to disperse ice crystals throughout the ice cream mix. Once the freezing process is complete, roughly 75% of the water in ice cream is frozen; the rest creates a liquid phase that contains dissolved sugars and other ingredients and throughout which the air bubbles, fat globules, and ice crystals are suspended.

In that liquid phase, known as serum, sugars play a key role in driving the freezing point of ice cream well below 0 °C, keeping the frozen dessert soft and scoopable at temperatures down to –20 °C.

Another key component of the serum phase is stabilizing gum—like guar gum or locust bean gum—that regulates formation and growth of ice crystals. Repeated thawing and refreezing of ice cream can cause ice crystals to grow larger and larger, which imparts a coarse, gritty texture.

Stabilizers help prevent this and keep water molecules in the serum from moving together and forming crystals, says Guy Crosby, an expert in food chemistry at Harvard T.H. Chan School of Public Health.

Food scientists are also developing new stabilizers that can play a supporting role in ice cream’s structure. For example, polyphenol extracted from strawberries helps ice cream keep its shape and prevents drips as it melts. And cellulose nanofibers from banana plants curb melting, prolong shelf life, and enhance creaminess (even in low-fat varieties).

A mechanical development in the early 2000s provides another way to ensure small and uniform ice crystal size. Low-temperature extrusion adds an extra, patented “slow churn” step in the middle of the typical ice-cream-making process. In the extruder, the ice cream goes from –6 °C down to –12 °C, after which it gets packaged and placed in a freezer at –20 °C or below to finish hardening.

Because the ice cream freezes more rapidly and uniformly in the extruder than when it sits in its package in a freezer, only small ice crystals have a chance to form—and they stay small. The kneading motion of the extruder also decreases air bubble size and distributes fat more efficiently, contributing to the enhanced smoothness, says Dinakar Panyam, an ice cream scientist with Nestlé.

With this technique, even low-fat ice creams can have a texture similar to full-fat varieties. Low-temperature extrusion “is a pretty important step in ice cream development over the years,” says Richard W. Hartel, a professor of food engineering at the University of Wisconsin, Madison.

Some shops go even further with the rapid-freezing approach, using liquid nitrogen to make to-order, supersmooth ice creams. The first time Eric West, owner and founder of Mix ‘n’ Match Creamery in Portland, Ore., tried to make ice cream that way, though, he made an absolute mess. “Funny story: I accidentally bought nitrogen gas instead of liquid nitrogen,” he says.

What’s special about ice cream made with liquid nitrogen? The nearly –200 °C liquid freezes the ingredients—sweet cream, flavoring, and handpicked mix-ins—almost instantaneously, creating tiny ice crystals and a smooth texture. It’s like making a latte in reverse, West says. “Instead of heating the milk, you’re cooling it superfast.”

How is this low-cal feat accomplished? “If you make something in the 2 to 3% fat range, offset some of the texture loss through noncaloric stabilizing gums, and whip a high amount of air into the product, then you can get to these really low calorie contents,” Goff says.

Whether you prefer ice cream made the old-fashioned way or prepared with scientific innovation, celebrating this frozen treat any day of the year seems like a policy everyone can agree on.